Simon Chesterman is Dean and Provost’s Chair Professor of the National University of Singapore Faculty of Law and Senior Director of AI Governance at AI Singapore. He is also Editor of the Asian Journal of International Law and Co-President of the Law Schools Global League.

Educated in Melbourne, Beijing, Amsterdam, and Oxford, Professor Chesterman’s teaching experience includes periods at the Universities of Melbourne, Oxford, Southampton, Columbia, and Sciences Po. From 2006-2011, he was Global Professor and Director of the New York University School of Law Singapore Programme. Prior to joining NYU, he was a Senior Associate at the International Peace Academy and Director of UN Relations at the International Crisis Group in New York. He has previously worked for the UN Office for the Coordination of Humanitarian Affairs in Yugoslavia and interned at the International Criminal Tribunal for Rwanda.

Professor Chesterman is the author or editor of twenty-one books, including We, the Robots? Regulating Artificial Intelligence and the Limits of the Law (CUP, 2021); Law and Practice of the United Nations (with Ian Johnstone and David M. Malone, OUP, 2016); One Nation Under Surveillance (OUP, 2011); You, the People (OUP, 2004); and Just War or Just Peace? (OUP, 2001). He is a recognized authority on international law, whose work has opened up new areas of research on conceptions of public authority – including the rules and institutions of global governance, state-building and post-conflict reconstruction, the changing role of intelligence agencies, and the emerging role of artificial intelligence and big data. He also writes on legal education and higher education more generally, and is the author of four young adult fiction novels including the Raising Arcadia trilogy. 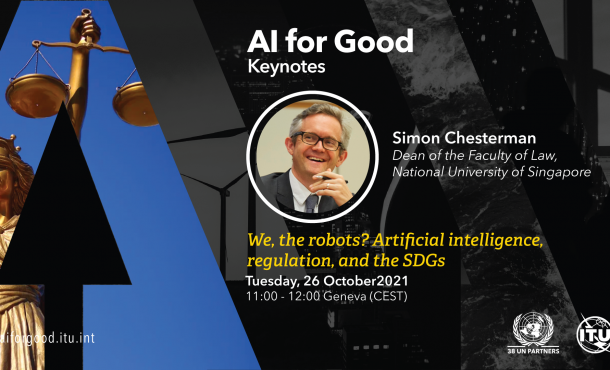